Prop 8 didn’t have much to do with Silicon Valley/SF.

Nearly the entire right side of the state is conservative. THEY DON’T LIKE THEM FAGGOTS IN TURLOCK, NO SIR. I admit this statement is inflammatory, but that’s the point. Bear with me here. Read to the end.

In Santa Clara county (my county), Prop 8 lost with 56% saying no and 44% saying yes. An 8% margin REJECTING Prop 8 here vs. a 4% margin APPROVING Prop 8 at the state level. Remember, California is the 3rd largest state in terms of land and 1st largest state by population. SF and Silicon Valley are very progressive, but much of the state (and population) is rural and conservative. Here are the votes from SF and Santa Clara counties:

By the way, to offer a little continuity to my sarcastic comment earlier about Turlock (aka “The City Of God”), Turlock is in Stanislaus County, which voted an overwhelming 68% yes on Prop 8 and 32% no:

All Republicans. Also notable is that Stanislaus county as a whole voted for Obama, 50% vs. 48% for McCain. Atypical.

Prop 8 should not have passed, but considering that the vote was SUPER CLOSE statewide (52% yes, 48% no – a difference of 506,414 votes) and considering that gay rights have never had to face the kind of battles that women’s rights and African-American rights have had to face, I’d say we’ve made a lot more progress than anyone cares to realize.

Aside from Matthew Shepard (which was in Wyoming – a predominantly conservative Republican state, not California, a predominantly progressive Democrat state) and Harvey Milk (which was never substantially proven to be a hate crime, just suspected as such), the gay community has mostly suffered harsh words and occasional physical assaults (not to belittle them in any way). Stack that up against public lynchings where entire towns participated and watched, Jim Crow laws, the Dred Scott case… and considering that slavery ended almost a century and a half ago (143 years, to be exact), look where gay rights stand versus African-American rights. Look at the LA Riots. Look at Katrina. Look at the fact that I’ve heard the word “nigger” uttered plenty of times (as a racial insult, not as slang) here, in a progressive area of California, in 2008. Look at how black people are portrayed in the media as a whole. It’s even the subject of plenty of internet humor: 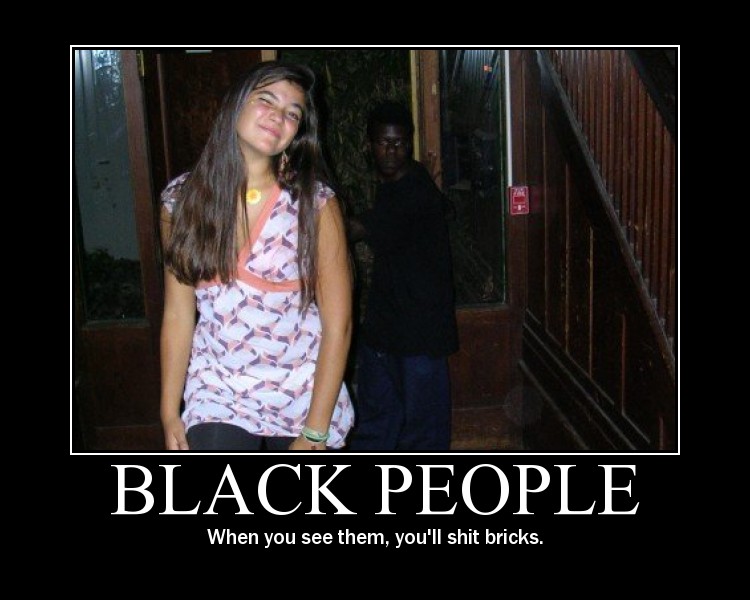 I won’t pretend I’m above laughing at cheap jokes and I won’t pretend that I don’t have a dark sense of humor. However, regardless of whether the above picture is funny to me, you or anyone else, it is a symptom of the overall issue that equality in this country is a long march for everyone, and institutionalized discrimination, even for cheap jokes like this, only perpetuates the problem.

It’s not about who is the bigger victim here, that’s not my point. But considering that in 4 decades of gay rights being in the public eye (84 years total, going back to the Henry Gerber’s Society for Human Rights in 1924), we’ve come far enough to have a 4% statewide split on prop 8, that’s pretty amazing. You have to understand that the gay lifestyle is challenging thousands of years of heterosexuality being the publicly perceived norm for people worldwide, whereas the idea of an African-American president is really challenging the history of racism in a nation that is only 232 years old.

Perspective, people, it’s all about perspective.

The reality is, more likely than not, Prop 8 will be repealed and overturned. Given how close the vote was and how compelling the argument for unconstitutionality is, it’s not hard to see the possibility. Also, you have to remember that Obama is against Prop 8 and while the proposition may have failed at the state level, it is quite possible that Obama could bring the issue to the national stage and make it a federal concern. Failure in California could be the catalyst needed for a nationwide push to support gay rights. Here’s a quote from Obama about Prop 8:

I’ve stated my opposition to this. I think it’s unnecessary. I believe that marriage is between a man and a woman. I am not in favor of gay marriage. But when you start playing around with constitutions, just to prohibit somebody who cares about another person, it just seems to me that’s not what America’s about.

Obama supports the Matthew Shepard Act, which was dropped because it was attached to a defense reauthorization bill that anti-war Democrats, conservative groups and President Bush opposed. This is an issue that, as part of an Obama administration, is guaranteed to be addressed. Hope is not lost, so please, simmer down, let go of some of the emotionally-charged reactionary freakouts and focus on the fact that today there is an entirely new future ahead of us, one that will no longer be the product of apathy and cynicism, but of real actual hope, something I can honestly say I am seeing for the very first time in my lifetime.

FDR, MLK, JFK – all great men who embodied the American dream and spirit, all great men who have shown history that humanity is not lost, that the future is not doomed and that one man really can make a huge difference in this world. Obama is no messiah, but it is clear that many people in our country can envision him as the next one of these men. Prop 8 is a drop in the bucket of what our future is going to be.

P.S. For the record (not that I should have to qualify my take on this), I have a gay parent, many gay friends and co-workers, some of whom who are proudly and openly out and others who are still afraid – to this day – to even publicly acknowledge who they are. It’s not that this issue doesn’t affect me, it’s that the bigger picture excites me more than bickering, finger-pointing and flipping out. We all deserve respect and dignity, folks, whether you’re a gay rights advocate from SF who voted no on Prop 8 or a staunch conservative from Turlock who voted yes. Show each other that respect, because you are both citizens of the same state, and that’s part of the change we’ve all been fighting for.

Contact your local representatives and let them know how you feel.

Be polite, eloquent, and voice your concerns. If you think Prop 8 is unconstitutional or invalid, say so, and include whatever evidence you may have. For instance, you could argue that the LDS/Mormon church violated their 501(c)(3) status to get Prop 8 approved. Do try to avoid emotional rhetoric because they tend to not respond as well to that sort of thing.

Here’s a guide to writing your Congressman with tips that apply to all public office positions.

If you voted yes on Prop 8 and don’t want to see it repealed, feel free to voice your concerns as well. This is a democracy and there is no reason you should be prevented from expressing your desires. As long as we all remain engaged and informed, there is no limit to our potential to achieve great things. Thank you for reading, I love you all and wish you the best.

Shout Into The Void Cancel reply