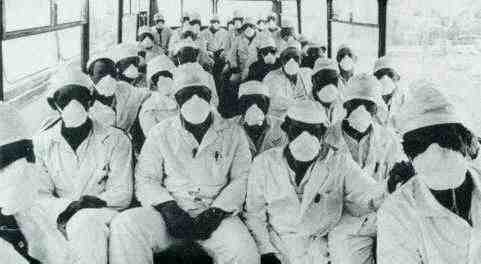 It’s pretty frightening what’s happening to Chernobyl and everyone should be talking about it. Best case scenario, radiation leaks out a little bit every day and poisons more of the land surrounding Chernobyl. Worst case scenario, there’s a possibility of another explosion happening and sending radioactive dust worldwide.

It’s been nearly 20 years since the meltdown occurred on April 26, 1986. The Russian government contained the radiation by building a concrete and steel shelter over the mess, but that has proved to be a poor decision since the concrete is starting to crumble from water damage (both inside and outside).

HBO aired a special called Chernobyl Heart in 2003 which dealt with some of the human effects of the meltdown. People who were children then are now 20-something adults with health problems, cancer, thyroid issues, you name it. There are children being born today that suffer from all sorts of birth defects, which scientists are certain are a direct result of what happened in Chernobyl. It’s a really heart-breaking thing to see and should anger and motivate people to ask questions that it seems nobody wants to ask.

Recently, people have been posting photo tours of Chernobyl online so everyone can see how bad things still are, 20 years on. Here’s one, another and a third. It’s hard to see stuff like this and still whine about how things are here, in the land of opportunity and excess.

Today I took a long walk. During that time I was able to reflect on some things.

One thing I was thinking about was just how far behind technology really is. I mean, it’s great we have so many neat gadgets in the world, but then I thought – the human body can experience things through one of 5 senses. What’s interesting to me is that camera technology has been around for ages, as well as sound recording technology. Ok, that’s 2 of 5 senses. And if you look at vibration feedback in video games and virtual reality interfaces developed to approximate certain real life conditions such as heat, coldness, pressure, pain, pleasure, etc., anything from a vibrator to an immersive body suit with wired contacts designed to send electrical impulses to imitate various feelings, these things do a pretty decent job of covering touch, although it’s pretty primitive.

But what about smell and taste? With a digital camera, you can take a picture of something and instantly bring it into the digital realm, cutting, pasting, altering, color-correcting, cropping and generally editing to your heart’s delight. Similar abilities exist for editing sound. I think it would be really fascinating if such a device existed for smell and taste. So much is made of AI and approximating human intellect in the media, but I haven’t seen anyone really address this idea since, strangely enough, Willy Wonka & The Chocolate Factory. When a piece of gum is chewed, one can experience a 5-course meal, flavor by flavor.

I think the concepts of digital photography and sound recording applied similarly to taste and smell would be interesting. You could find a smell or taste that you enjoy and capture it in some way, to store, edit and experience later. You could even use these captured smells and tastes much like paint, mixing and combining them to form new experiences, previously unknown to man. Or apply the technology the same way noise-cancelling headphones work: by emitting an alternate sensation to cancel out unpleasant smells and tastes. You could walk into a room packed waist-high with corpses with one single rose on the other side of the room and all you’d smell is the flower. Weight loss would be easier, too. I admit that a lot of the foods I eat that I shouldn’t are for the flavor rather than the fullness of my stomach or nutritional value. So instead of actually eating a huge banana split with tons of ice cream and toppings, I could simply simulate the flavor of it, satisfying my craving without actually consuming anything I shouldn’t. The idea isn’t too far removed from what a nicotine patch does: all the satisfaction without all the damage. Fascinating, and I only hope that this concept is realized within my lifetime.

Another thing I was thinking about was the nature of my relationships with people and what perceptions I have of the realities that I put so much faith in when it comes to these relationships. I have to admit that this line of thought was brought on by my decision to re-read The Transparent Self by Sidney Jourard. Sometimes I really wonder how much I know the people I invest so much energy into caring about. It’s wonderful when someone surprises you by doing something really fantastic that you didn’t really think them capable of, but in my experience it’s usually the opposite – I am let down by people that I care a lot about because sometimes I tend to edify them based on my feelings about them. However this doesn’t allow for much breathing room when it comes to mutual discovery, because once a behavior pattern like that is implemented, it creates expectations and sets standards for how someone is to be in the context of my life. So my friends, rather than being truly individual, end up fitting roles.

This got me thinking about all the times that someone in my life made me the _____ guy, where all we ever had to talk about or share was a single experience or small handful of moments, and it made me really sad. To constantly have the same in-joke, to always refer back to “remember that one time…” is truly sucking all the meaning out of my life, reducing all the complex thoughts, emotions and experiences I’ve had to one defining moment that I couldn’t escape. It felt lonely thinking about this. If I died today, what would those closest to me say of me? My bet is that the majority of people would remember me for being a loud, obnoxious ass that speaks too frankly sometimes. I feel there’s so much more to me, and borne out of the sadness and loneliness was a vow: I will not be afraid to share my true self with people in my life – warts and all – and I will do my best not to censor the things that make me who I am simply to appear more “normal” or “well-adjusted.” It’s a waste. We are all here for such a short amount of time, it is really up to each person to make the most of the human experience and to connect with others in the way that they need. The alternative is what, loneliness, fear, withdrawal, depression? I’d rather lose friends as myself than stockpile them as someone else.

Lastly, I was thinking about the nature of death and energy and time and how they interconnect. I watch a lot of forensic shows, and a good deal of them talk about someone who graduated high school at the top of their class then moved on to college, graduating with honors while working full-time and raising a kid, then pursuing a successful career and beginning to establish a very comfortable life – only to be gunned down at 24 or 25 years of age. My thoughts in reaction to that turn to what a waste it is to dedicate so much energy over so many years trying to strive for this huge sense of accomplishment only to have it stripped away. If I knew I would die at 25, I wouldn’t waste my time on such frivolous things; I’d be out living life, building relationships, experiencing all that I could in my short time.

I think about how many people this could have happened to and I wish there was a way to harness that wasted energy and time. We could accomplish so much. So many problems could be solved. But what truly frightens me is that I could become one of these people. Every day of getting up with purpose and drive, every day of striving to be better, every day of laying foundations and building on them just to be stripped of it. Seems like such a waste of life, of my occupied space in this world. This concept reminds me of and can be related through the final fight in The Matrix Revolutions. Neo and Smith wage an epic battle, defying gravity, time and the accepted boundaries of the Matrix, and the entire trilogy all boils down to one short snippet of dialogue:

And despite millions of dollars and special effects and CGI and other Hollywood wizardry, that singular moment is the most poignant for me. The viewer is confronted with a life-altering question that they must then ask themselves – whether or not they get up every day and fight to live because they choose to, or whether it is something else. In my eyes, life is a challenge to overcome one’s own weaknesses and shortcomings and triumph in some way – to achieve success in whatever way is important to yourself. To choose to live every day with reason, with purpose, in the face of great challenges and spirit-crushing failures. To be because you can.

I will leave those of you who have braved this long tirade with a final quote:

“We are said to be a society dedicated to the pursuit of truth. Yet, disclosure of the truth, the truth of one’s being, is often penalized. Impossible concepts of how man ought to be – which are often handed down from the pulpit – make man so ashamed of his true being that he feels obligated to seem different, if for no other reason than to protect his job. Yet, when a man does not acknowledge to himself who, what, and how he is, he is out of touch with reality, and he will sicken. No one can help him without access to the facts. And it seems to be another fact that no man can come to know himself except as an outcome of disclosing himself to another person. This is the lesson we have learned in the field of psychotherapy. When a person has been able to disclose himself utterly to another person, he learns how to increase his contact with his real self, and he may then be better able to direct his destiny on the basis of this knowledge.” — Sidney Jourard, The Transparent Self.

Be well and be yourself.

9 days. I am not looking forward to it.
END_OF_DOCUMENT_TOKEN_TO_BE_REPLACED